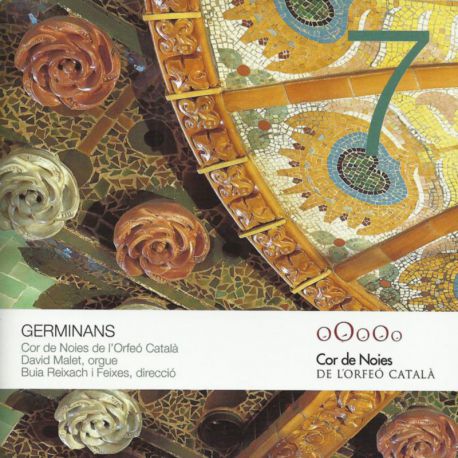 Seventh volume of the collection "Els volums del Palau", dedicated to the work of Benjamin Britten.

Benjamin Britten is the most important English composer of the 20th century. Influenced by British pragmatism, one of his outstanding features was his eclecticism. He did not follow any of the leading trends of his time, but adopted, without dogmatisms, a language best suited to what he wanted to express in each composition. Brittenâ??s choral music, composed for English university and professional choirs and boysâ?? choirs, is particularly significant in this respect. Included in this repertoire is the Missa brevis in D, op. 63 dedicated to the Catholic Westminster Cathedral Choir and its conductor, the organist George Malcolm, who premiered it on 22 July 1959. Consisting of only four parts (since it omits the Credo from Catholic liturgy), this mass is basically a tonal composition, unified by a tension between D major and F-sharp minor, producing some forays in bitonality.
Two Marian songs inspired by the Montserratian style are a beautiful example of spiritual music and reflect the devotion of this Benedictine abbey. In the first two motets, the great performer and composer Pau Casals expressed his most simple, intimate and authentic compositional inspiration. Father Ireneu Segarra, conductor of the Montserrat Escolania (childrenâ??s choir) for more than forty years and a lucid teacher, also demonstrates his knowledge of and sensitivity to religious composition, particularly noticeable in his Salve Regina Germinans, whose music is deeply communicative and exquisitely refined.
His work as an organist at the church of La Madeleine in Paris led Gabriel FaurÃ© to compose religious music. His skill, discretion and intellectual dignity were uncommon amongst the ecclesiastical composers of his times. "He knew how to find a highly spiritual ecclesiastical language which, through its calmness and confident freedom, gave us a perfectly theological expression of hope and charity without the need of faith, wrote Emile Vuillermoz. Together with his masses and his famous Requiem, the Latin motets included in this recording are a fine example of all this.
The Three motets, op. 39 by Felix Mendelssohn were completed in Rome on 31 December 1830 and dedicated to the nuns of the TrinitÃ  dei Monti church. The alternation or contrast between the homophonous fragments that encourage the figurations and embellishments of the organ and the contrapuntal sections that reflect Bach" influence (one should not forget that Mendelssohn was the Romantic discoverer of Bach´s music) constitutes the main structure of these motets. If the "Veni Domine" is based on a homophonous texture, the "Laudate pueri", with its canonical beginning, seems to follow Bach" model. The pastoral nature of the "Surrexit pastor bonus" is reflected in its notation, and the "Surrexit Christus" is definitely polyphonic, with a final "Alleuia" in a Baroque fugue style.