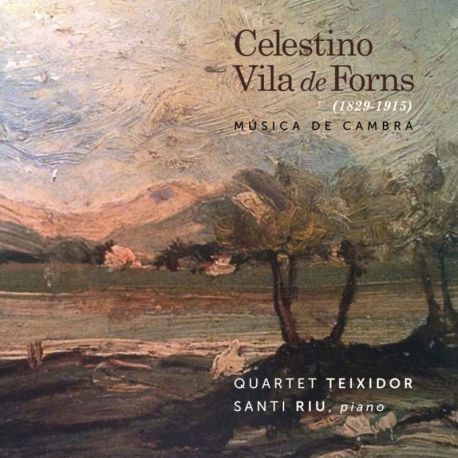 Chamber music by Celestino Vila de Forns that has recently been recovered in concert by the Laboratory of Musicology of the University of Lleida.

All of Vila de Forns chamber music has been recently recuperated in concert by the Laboratori de Musicologia from the Universitat de Lleida, with the complicity of the pianist Santi Riu and the Quartet Teixidor, the other protagonists of this recording.
Apart from his main dedication to religious music, he also cultivated other genres. Of special interest is his contribution to chamber music from the 19th Century. He is the author of two Quartets for violin, viola, violoncello and piano (in C minor and E minor) and one Quintet for piano, two violins, viola and violoncello (in A major), the pieces that are included in this recording, and written, most probably, at the beginning of 1880s. With these three titles, Vila de Forns is one of the most notable Spanish composers of chamber music in his generation and maybe the first to compose for these two instrumental formations, already within the aesthetics of Romanticism. These works suggest that the simple idea of amusement has already been left behind, where the role of key instruments are emphasized in sonatas with accompaniment, or a concertante style is arranged around a reduced version of a concert for piano.
The composer tries to give an equal treatment to all parts, though sometimes the piano has a greater role in passages closer to the aesthetics of the quatuor brillant.