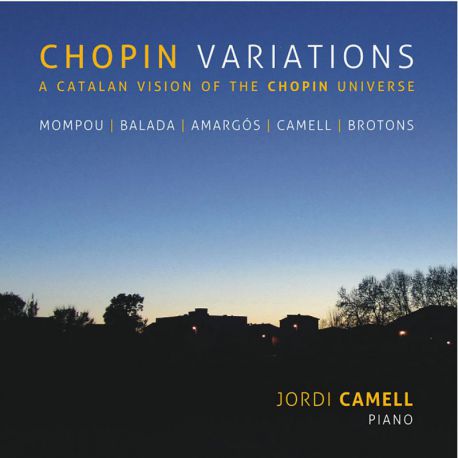 Beautiful tribute to Chopin, which includes pieces inspired by the Polish composer by Jordi Camell.

Although this may sound like a cliché, Frederic Chopin is, without doubt, the most universal of Polish composers and the most Polish of universal composers, having for many years been an excellent ambassador for Polish culture. There isn?t a pianist in the world whose repertoire does not include his works, as there is no music lover who isn´t familiar with him.
After becoming known through his concerts in Paris, his fame began to spread in many countries, where his works as a young composer and pianist revolutionized music with its very personal romantic content, original and new for those times, which to this day have not ceased to enchant and thrill all kinds of public. He received many invitations from the most exotic corners of the world which he usually rejected not only because of his poor health but also his terrible fear of performing in large theatres and concert halls. Chopin therefore travelled relatively little and on one of those rare trips, passing through Barcelona accompanied by George Sand and her two children, fate led him to Mallorca. This not only eventually proved to be very important for both his sentimental life and artistic creation, but gave him the opportunity to step on Catalan territory where his works had a truly enthusiastic reception.
To mark Chopin?s stroll down Las Ramblas in Barcelona 175 years ago (repeated a few months later on his return to Paris), his brief stay at the Gran Hotel de les Quatre Nacions and the fascination he exerted on important figures of Catalan music, an idea has developed of paying him homage through works he inspired, some from the 19th century, others very recent, all masterfully performed by Jordi Camell. We therefore have the pleasure to introduce to you this new record hoping you?ll enjoy it and discover a new Chopin, somewhat hidden between the notes of creators who have truly experienced his works, and, moreover, are Catalans, that?s to say also Poles.