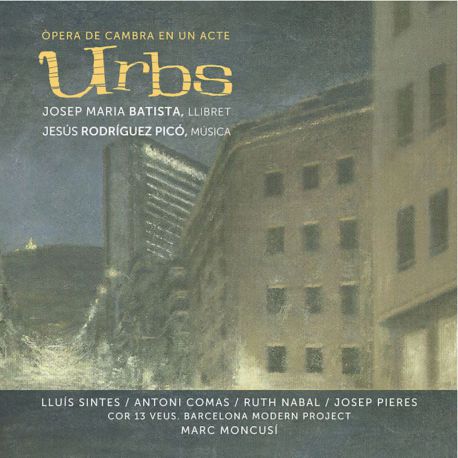 Rodríguez Picó's opera. In this case, the third of the trilogy of chamber operas of the composer.

Urbs is the third chamber opera of a trilogy that started in 1994, each with its own instrumental and vocal characteristics. The first was El paradÃ­s de les muntanyes with a text by Miquel Desclot from Alfred Jarry and the second, Hotel Occident with a text by Lluïsa Cunillé.
Between March 2007 and February 2008, I collaborated with Josep Maria Batista at Catalunya Radio in order to organize a series of programs commemorating the twentieth anniversary of the radio station Catalunya Musica. These meetings lead to the idea of creating a piece centred on aspects that characterize our modern day society. Without much hesitation, we thought that emigration and the city today could be a good argument for a story.
The characters of the piece each have a given orchestral material. Urbs, the main character, both solemn and authoritarian, moves threads in order to position each character in his desired place, I thought that a waltz theme would highlight the slightly "diabolica" aspect of this character. Anton, an East European, is characterized by a music tinged with klezmer harmonies, Fatima with a slightly North African theme and Jan, decided and emphatic, with music that is almost martial. The childrenâ??s choir intervenes with two songs symbolizing the inevitable wheel of fate, and the Narrator presents objectivelythe reality of this phenomenon, this is the cold voice of statistics.
The piece is structured around one act and three scenes. Even though each character at different moments performs some small aria (or song) it is written with continuity.
There are two versions of Urbs, one for voice and piano (finalized at the end of 2007) and the other, voice and five instruments.