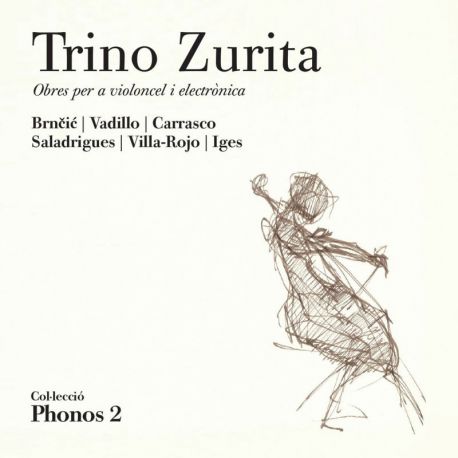 Great example of the understanding of contemporary chello practice.

Trino Zurita is a musician and cellist, who is among the world' s best, but is unshackled by history. He brings together a particular technique and a sound evolving in new ecologies. His use of the bow and strings, combined with the relatively unknown sounds of electronic synthesis, may be compared to early attempts at bringing together voices and musical instruments, distances which, today, are considered to be natural. Combining loudspeakers and instruments was always, and continues to be, a difficult task and there is many a problem to be solved in the context of sound compatibility. Trino Zurita aims to deal with such problems on the basis of the aesthetic mastery created in a future context. The solving of such matters is the very soul, imagination flourishing on the fingertips of a present-day cellist. The experimental artist suggests a new way of hearing and listening and transfigures, in combination with new sounds, music from the past and popular tradition from radio, film or video, danceable and entangled in zapped sequences, in an arboreal and adolescent mixture of styles and their detection within fractions of seconds. Trino Zurita is a demanding artist who can masterfully conjure up such an intense and fleeting polysemic experience.
Radio, cinema, TV and Internet have efficiently generated a taste for the "effects of sound in the public at large". Although the relationship between such "effects" and musical art may be tangential and form part of what is inductive or unnecessarily metaphorical for ears untrained in the musical art, this vast field of "affectionless effects" are ultimately the only form of exchange. The idiolect.
In presenting the present recordings, a sequence of works of undeniable technical rigour, selected by the instrumentalist himself, we, the composers, are attempting to expand sound towards new horizons in the acoustic continuum, a sound that will serve to broaden this idiolect. The pizzicato and a prodigious "spectral bow" on the different parts of the tastiera combining articulation, intensity and timbre in a sole gesture. A complete mastery of the positioning of notes and their limits (microtones) "with or without vibrato" and with a wide register. Modulation as microtemporal change in each sound, are the marks of an enriching interpretative performance. Thus we come to understand the role of the new-born contemporary cello. Trino Zurita masterfully demonstrates this in the context of 21st century Spain.