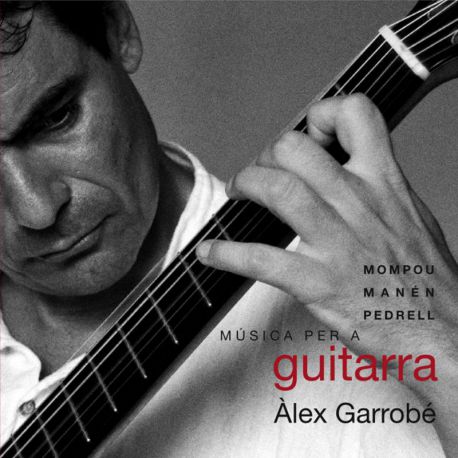 Música per a guitarra

The two works by Mompou featured on the present CD are faithful reflections of a particular style and the writing is seen to be less conditioned by the guitar in the CanÃ§Ã³ i dansa than in the Suite. The pianistic character of the first piece is so evident that, with only a few modifications to the score, several pianists have adapted it for piano performance as if it indeed belonged to the original collection. However, the difficulty such a well adapted piece for piano poses for the guitar may well indeed be the main reason why such a beautiful composition has not proved to be as popular in the guitar repertoire as its quality deserves.
Mompou's attitude was very different in terms of his first piece in which, either due to the confidence Segovia inspired in him or the doubts he may have experienced when composing his first guitar piece, and he gave the Andalusian guitarist carte blanche to adapt the work to the instrument as he saw fit. With Segoviaâ??s revision of the piece, which is inspired by the Galician cityâ??s atmosphere of peaceful contemplation, the composition became consolidated and has been performed for decades.
Recent research, however, has allowed us to recover Mampouâ??s manuscript and the present recording features the full original version which is slightly longer than the celebrated adaptation by Segovia who deleted bars from certain parts of the score. Mompouâ??s original harmonic solutions, some of which had been modified by the guitarist, especially in the final muÃ±eira, have also been scrupulously observed.
In the final analysis, the CanÃ§Ã³ i dansa and the Suite exude the intimate quality that defines the music of a composer who made concentration and discretion both his modus operandi and modus vivendi.
The general atmosphere of ManÃ©nâ??s Fantasia sonata forms part of a universe of sound in which Wagnerian resonances merge with Mediterranean brightness. The influence of Germanic music, and particularly of ManÃ©nâ??s much-admired Richard Strauss, can be appreciated in the pieceâ??s general appearance, structured as it is in five movements that are linked so as to form a continuum of events framed in a formal cyclic structure. Thus, if in Mompouâ??s CanÃ§Ã³ i dansa XIII the composerâ??s pianistic approach is evident, the Fantasia sonata cannot conceal its underlying orchestral conception.
The three pieces by Felip Pedrellâ??s nephew, Carlos Pedrell, (PÃ gina romÃ¡ntica, Lamento and Guitarreo) are a good example of the late Romanticism that particularly suited the tastes of guitarists and a significant part of the audiences in the first half of the century.
With an instrumentally more ambitious compositional approach, the Danzas de las tres princesas cautivas (Dances of the Three Captive Princesses) are a good example of the extent to which his uncleâ??s ideas helped to shape the aesthetic universe of the Uruguayan songwriterâ??s universe. Dedicated to Segovia, Pujol and Llobet respectively, the dances that close the present recording evoke an imaginary Spain and recover the taste for exoticism and orientalism that had so fascinated late-19th century artists, exemplified, in terms of the guitar repertoire, by such an acclaimed piece as TÃ rregaâ??s Capricho Ã¡rabe (Arabian Caprice).