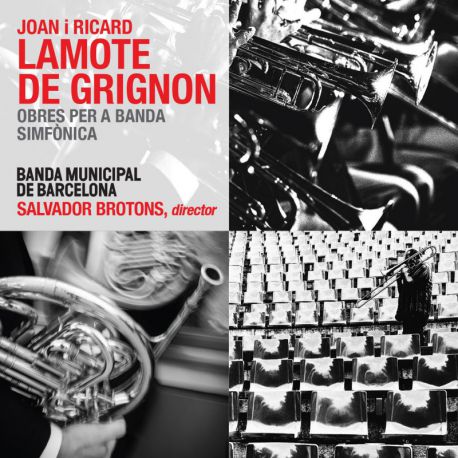 Tribute to Ricard Lamote de Grignon who, at the time, could not enjoy the well-deserved public recognition, at the head of the Barcelona Municipal Band (BMB).

The recording you have in your hands is more than just a tribute to Ricard Lamote de Grignon, the composer, conductor and teacher who was unable in his day to enjoy the public acclaim he deserved, which came from the city?s limited musical circles. It also bears testimony to the revitalising work undertaken by the Banda Municipal de Barcelona (Barcelona Municipal Band, BMB) since it moved to the Auditori under the baton of Salvador Brotons. And finally, it marks a reunion between the BMB and the spirit and the essence of the group formed in 1886.
The Barcelona Municipal Band was set up by Barcelona City Council in 1886 with one overriding goal: to bring quality music closer to ordinary people. It did so in association with the founding of the Municipal School of Music, which would provide good professional musicians so that it could complete its mission in the best possible conditions. The appointment of Joan Lamote de Grignon as conductor of the BMB from 1915 to 1949 was the paradigmatic example of this ideal. And this recording will undoubtedly connect with the search for beauty demanded by the City Council and, later, by the elder Lamote.