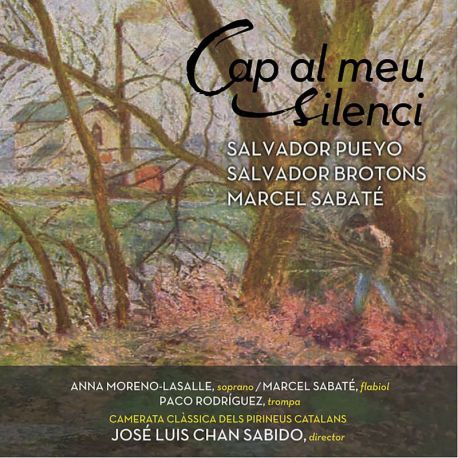 Tour of different styles arranged for flabiol by Marcel Sabaté with the aim of demonstrating the possibilities of this instrument.

In this CD you will find a variety of pieces arranged for the flabiol by Marcel Sabaté demonstrating the possibilities of this Catalan instrument.
The flabiol is a wind instrument belonging to the group named bisellats (similiar to a flute) emerging from a rural musical environment and found all around Europe.
In Catalonia it appears in ancient popular cobles sung by jugglers during the medieval times, and with very few alterations, was then adopted by the cobla de tres quartans in the last century.
The ancient flabiols used to be one single piece with a flat end through which one blew and without any keys. The beak headed flabiol with two pieces (head and body) probably resulted from the need for tuning by the cobla Pep Ventura. Subsequently and for similar reasons, keys started to appear, enabling the execution of precise chromatic notes required by the modern cobla.
But the most important progress took place recently when this instrument was incorporated into the conservatories syllabus. The flabiol has since been considered as important as other classical instruments and therefore suitable for any type of music.