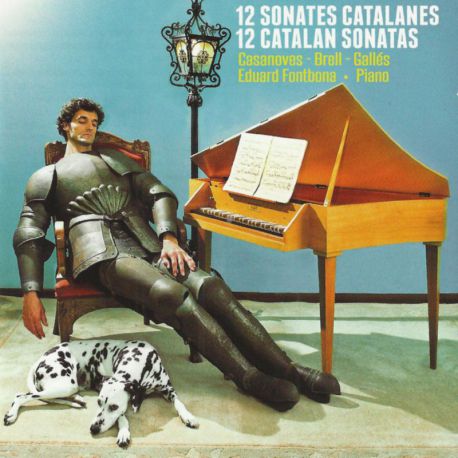 Sonatas of Catalan composers located between the end of the 18th century and the mid 19th century.

In the era that corresponds to the authors of the present disc (the end of the 18th century to the mid-19th century) the term sonata was not always related to a work in different movements but also to a simple, single piece with a texture that was accessible to both performers and listeners. If the sonata in various movements was a result of the evolution of the dance suite, the single-movement sonata has its main reference in the figure of Domenico Scarlatti, whose catalogue boasts over 550 sonatas composed for the harpsichord.
The structure of this model is highly reiterative: it is essentially a brief work in two repeated parts very similar in terms of sound, which, in modern terminology, we would class as A-A ', in which A' is initiated at a fifth from the A period, hence its being regarded as a two-part sonata. Constructed, for the most part, with rapid values and abundant ornamentation, it evokes the sound response of the harpsichord, which did not allow for long duration values and was more suited to livelier and cadential sound- structures.
The works featured on the present disc play on this instrumental ambiguity. Although the pieces sound good on the piano, in many cases they show evidence of their harpsichord genesis in terms of their shorter range, quick values, continuous ornamentation of the melody and subjection to a simple and repeated expository structure.
We may deduct from the abundance of written works by the aforementioned authors that there was a considerable interest in such pieces among audiences and performers, including both students seeking educational material and aspiring amateurs.
Whatever the case may be, the historical trajectory of these sonatas shows us the presence of classical and pre-Romantic styles here in Catalonia with an appreciable output associated with the monastery of Montserrat, one of the greatest cenacles of music, and Vic Cathedral.